Title: Creeks Bend
Author: Alora Kate
Release Date: April 13th
Genre: Standalone Mystery Thriller
Universal Buy Link For All Platforms
Creeks Bend is LIVE and available for purchase at Amazon, iBooks, Kobo and Nook
Add to your Goodreads TBR
Synopsis:
This was his chance.
His time.
There was no one in his way from showing the world what he could do.
He would show them what he was capable of.
His talents.
His creativity.
His passion.
Five Dead Bodies.
Four Possible Suspects.
Three Special Women.
Two Lovers.
One Killer…. Him
Creeks Bend is for readers aged 18 and over 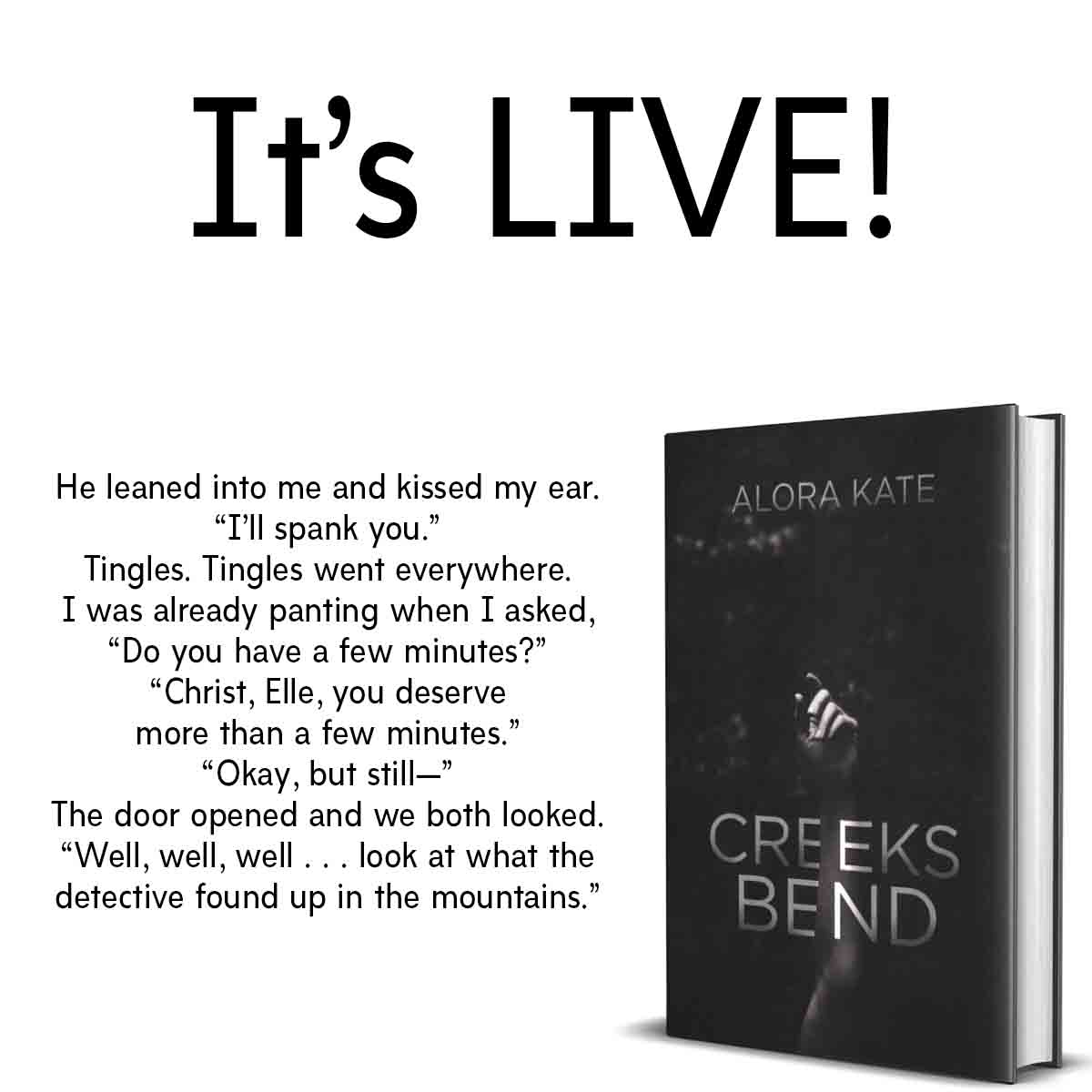 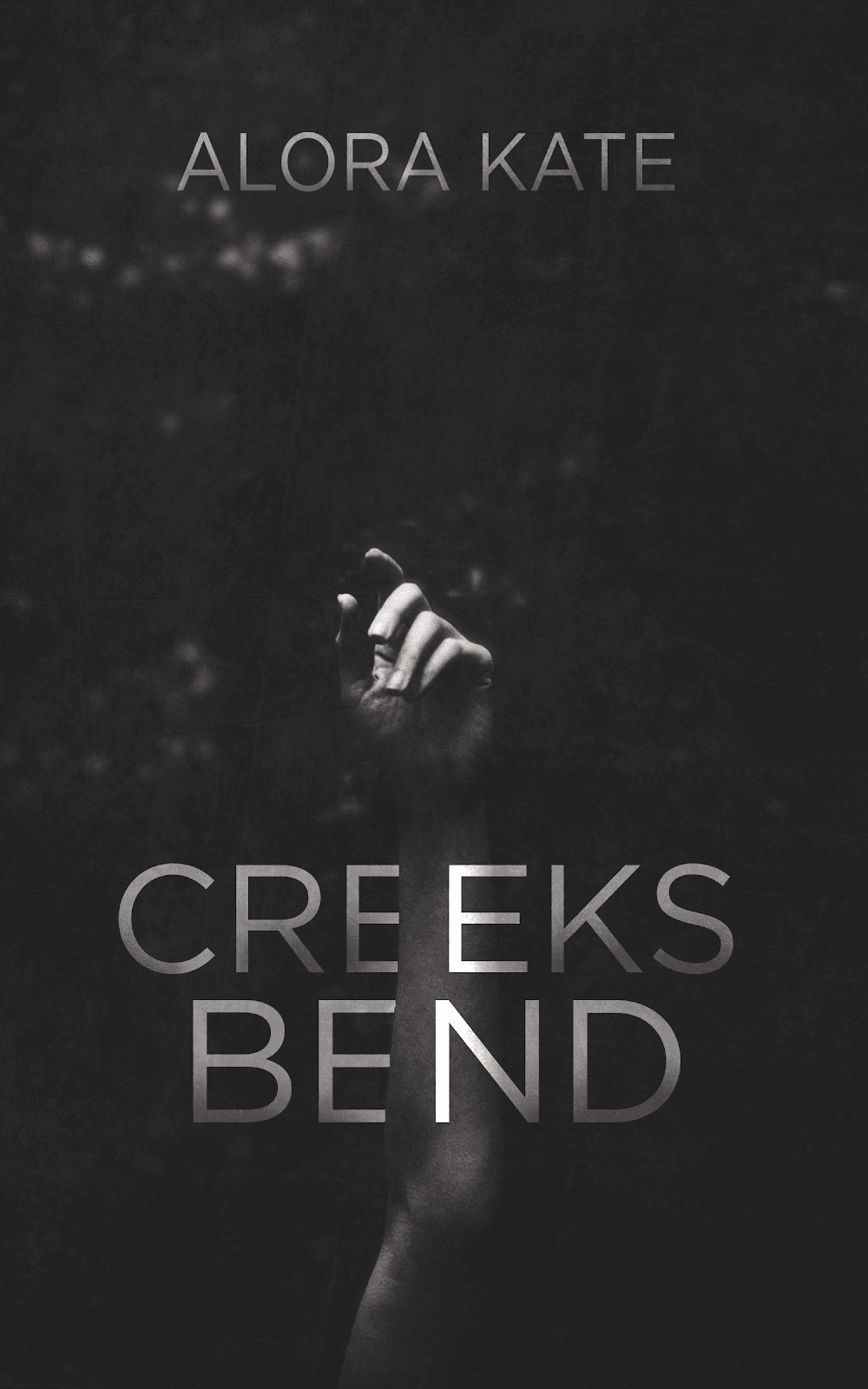 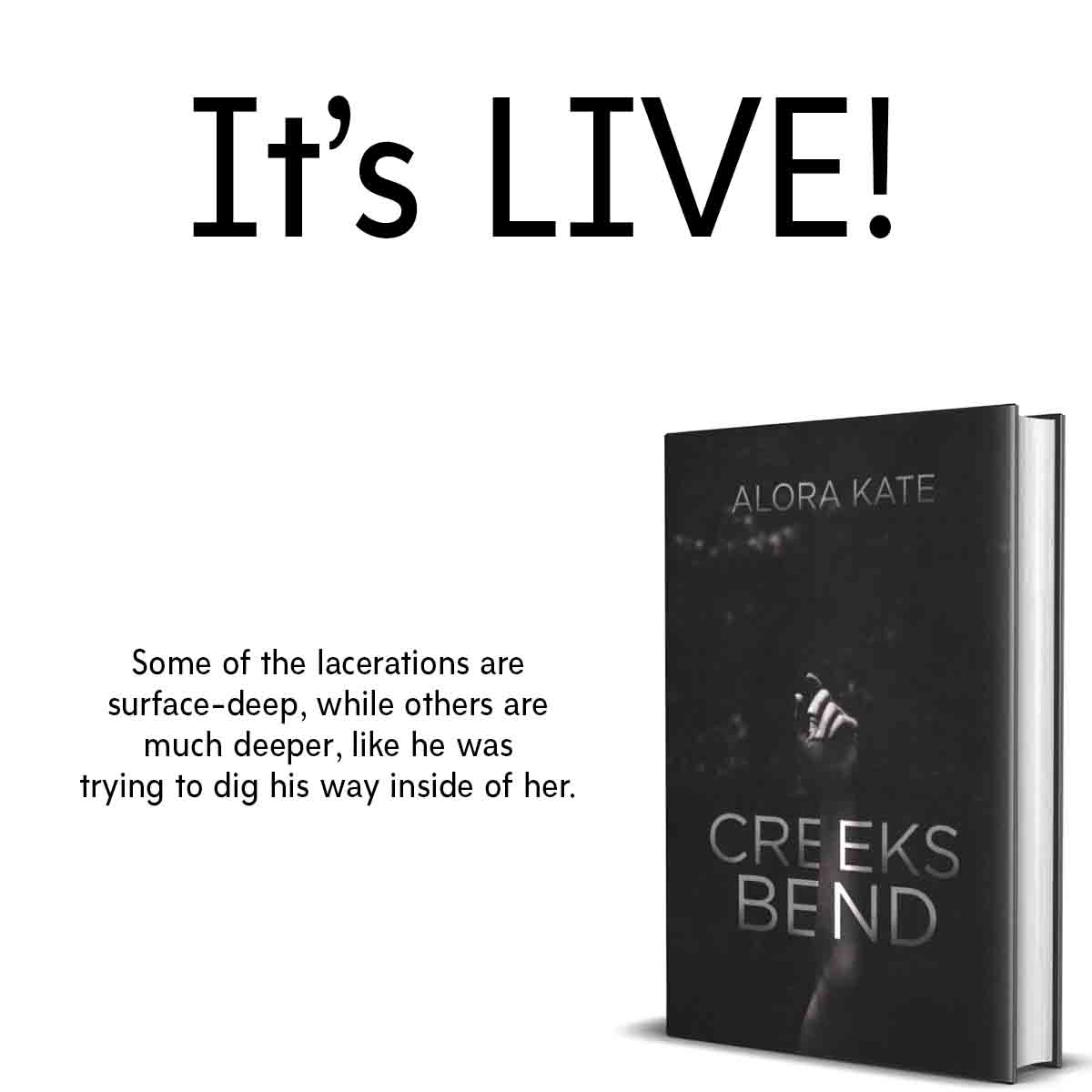 “Even in death, she’s beautiful,” the coroner of Crook County said, admiring the body on the slab while I did my best to keep my shit. Never, and I mean never in my career had I seen something, someone so tragic.
Christ.
It was bad.
I pushed my mask tighter against my face, the one the coroner gave me after dropping some oil on it—apparently, to mask the smell, which didn’t work. Even though I was pushing it into my skin, I could still smell her. I had a job to do though, so I did my best not to breathe too deeply, or at all.
Creeks Bend was in Crook County and was about a hundred miles from where I lived in Morris Hill. It was tucked away, nestled up in the Appalachian Mountain Range in Tennessee. Though Crook County had a few deputies, they were missing a detective so when the call came into the station, my commanding officer, Dan, decided I needed a break from my life and I jumped at the chance to get out of town.
“Don’t you think?” the coroner asked, glancing at me.
“What?”
“I said, ‘Even in death, she’s beautiful.’ Don’t you think so, Detective?”
I wondered what he was breathing through his mask as he looked down at the victim’s body again. Her face—what was left of it—was rotten. Her jaw and mouth were gone, one eye was missing, and all the hair on her head looked like it was plucked out, one strand at a time, leaving not even a hint of stubble on her bald scalp. She had multiple puncture wounds, small and circular and it was unclear if something had eaten part of her face or if had melted away.
She was beautiful, not today but prior to her death, I thought, yes. Yes, she was probably beautiful.
“Sure,” I answered, continuing to inspect her mutilated body. I noticed all her fingertips were missing, along with her toes and the left side of her stomach. They weren’t missing because they were cut off; no, they looked just like her face—like melted plastic.
The coroner leaned closer to the victim, his hand hovering above her arm as he closed his eyes. I heard him take a sharp inhale, the coroner’s nose a breath away from the curve of the woman’s neck. “She was,” the young man said and I shook my head.
“Can we get on with it?”
Author Bio:
“I hear voices in my head and I love that its totally okay.” – Alora Kate
Alora Kate is a multi-genre author who likes to be bold and original; stepping outside of the box and bringing her readers fresh characters from all parts of life. She’s a mother, college student, photographer, and graphic designer. She resides in northern MN with her son, where she plans to stay for a long time despite the cold winters.
GoodReads:: https://www.goodreads.com/book/show/38619775-creeks-bend
Facebook: https://www.facebook.com/authoralorakate/
Newsletter sign up: https://goo.gl/KJTtxe
Brought to you by….